Despite reaching the knockout stages of the 2017 CAF Champions League, Mamelodi Sundowns have urged football supporters in the country to come to the stadium on Sunday for their last group game.

The African champions welcome Democratic of Congo side AS Vita in their final Group C match at Lucas Moripe Stadium this weekend.

Announcing on their Twitter page, the Tshwane giants said entrance is free at the venue, but fans will pay half price if they are not dressed in yellow colours.

The Brazilians sit at number two with eight points and are already through to the quarter-finals of the tournament after beating Ethiopia’s Saint George 1-0 in Addis Ababa.

“Masandawana let’s show Africa OUR passion, it’s time to rally behind your team as they take on A.S Vita this weekend! #SouthAfricaUnited,” reads a tweet.

In the opening leg, Sundowns bagged a 3-1 win over Vita in Kinshasa.

Lucas Moripe Stadium is the venue on Sunday, July 9 and the match is getting underway at 19:00 (CAT). 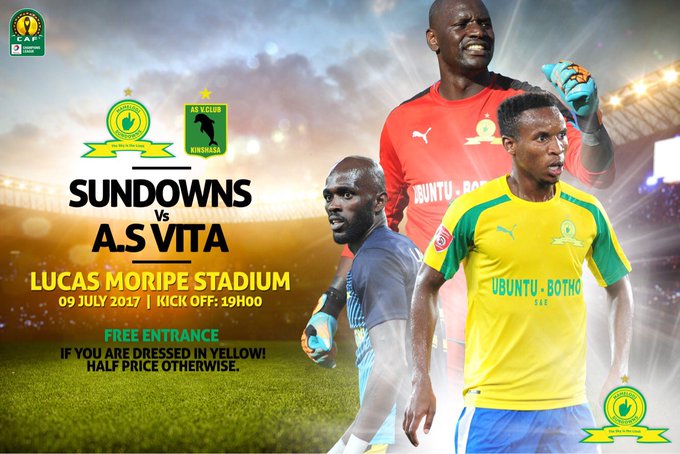 Masandawana let’s show Africa OUR passion, it’s time to rally behind your team as they take on A.S Vita this weekend! #SouthAfricaUnited