Chibuogwu Nnadiegbulam – AIPS Media
LAUSANNE, September 6, 2019 – Since making his marathon debut on April 21, 2013, Eliud Kipchoge has been the man to beat at 26.2 miles, winning all but one of his 12 marathons to date. His 11 fastest times are between 2:01:39 and 2:05:30, while his slowest of 2:08:44 was recorded at the 2016 Olympic Games, where he won gold. All this time, the Kenyan’s biggest competition has been himself, but in October 2019 his only opponent would be the clock, as he embarks on a race against time – literally.

Next month, between 12th and 20th in the heart of Vienna, Austria, the world record holder will be making a second attempt to become the first person to break the two-hour barrier in the marathon through the INEOS 1:59 Challenge. And beyond his quest to make history is an overwhelming drive to inspire humanity by showing that “no human is limited”. Even if one has to try more than once.

In preparation for the epic task ahead, Kipchoge has been training in Kaptagat, Kenya, since three months ago, covering between 200 and 220km per week as he makes sure to leave no stone unturned both mentally and physically. With diary entries published on the website dedicated to this momentous project, Eliud gives regular updates on his training programme and the progress he is making. In his latest post he said: “At this stage of my preparation, it is important that the body responds positively and I’m happy to report that this is definitely the case.”

He spoke about an enjoyable long run which he had recently: “My breathing felt good, my muscles were both strong and relaxed and my legs were moving in an extremely good way. To me, this is positive for the future and I hope to maintain that same feeling over the next six weeks before the INEOS 1:59 Challenge.”

The last miles of an intense long run! 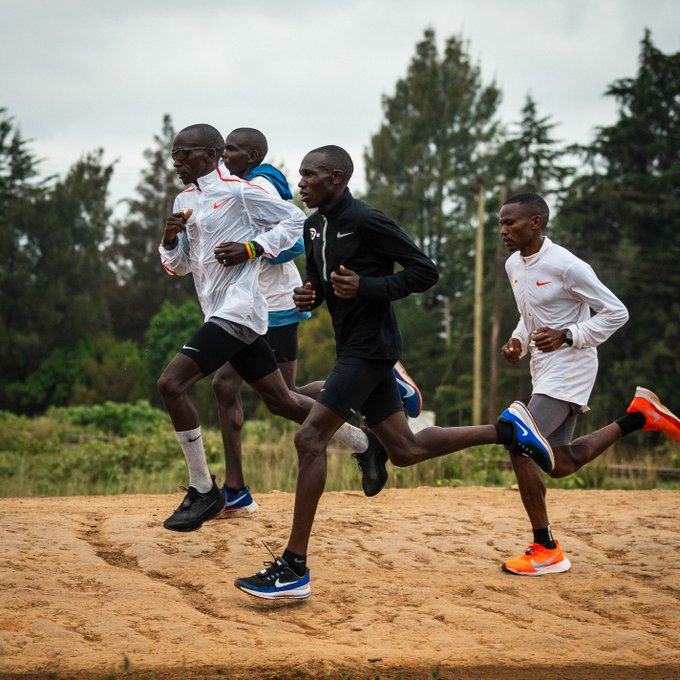 238 people are talking about this

The Challenge has been scheduled for Saturday 12th October. But in case of adverse weather conditions on that day, then any of 13th to 20th would serve as backup. The Reichsbrücke, Vienna’s famous imperial bridge, is the starting point for the race which will end directly on the Prater Hauptallee near the Ernst Happel Stadium between Meiereistraße and Marathonweg.

On the weekend of 31st August – 1st September, a series of successful tests were conducted on the course, with the INEOS 1:59 Challenge team testing the race management operations, athlete facilities, pacing plans, broadcast plans and timing systems. Star names like 1500m and 5000m champion and Olympic medallist Bernard Lagat, Australian champions Jack Rayner and Brett Robinson, and 5000m Commonwealth Games champion Augustine Choge, who will be pacing Kipchoge in the Challenge, were present for the tests in Vienna. “The aim was to ensure nothing is left to chance in the bid to give Kipchoge the best possible opportunity to make history next month,” read a statement on the website.

Kipchoge, who remained in Kenya so as not to interupt his build-up routine for the big day, acknowledges the significance of the pacemakers. “Two of my training partners, Victor Chumo and Augustine Choge, have been assigned with that role and we have practised in track sessions for them to take the lead ahead of me to replicate what will happen in Austria,” he said.

The reigning world and Olympic champion appreciates the impressive line-up of pacemakers – including the Ingebrigtsen brothers from Norway, world and Olympic 5000m medallist Paul Chelimo and European half marathon record-holder Julien Wanders – that have expressed commitment to his mission. “It is a huge morale boost for me to have these guys and many others by my side. It gives me great heart, and I fully appreciate that they have accepted a pacemaking role in Vienna. My hope is that they will scoop the medals at the Doha World Championships before going on to play their part in history for the INEOS 1:59 Challenge.”

The world record of 2:01:39, which the 34-year-old achieved in the Berlin Marathon of 2018, is not his fastest time over that distance. In 2017, he clocked 2:00:25 in his first attempt to break the two-hour barrier through a project called Breaking2 in Monza, Italy. The experience gained from that Formula 1 racetrack near Milan on May 6, 2017, has been invaluable in the planning of next month’s event and the reigning world and Olympic champion is not short on confidence. “I guess the feeling I have is a little like a successful lawyer entering court in that he believes in his heart he has done the best preparation possible and he walks into the building thinking he is a winner,” the IAAF’s World Male Athlete of the Year 2018 asserted.

Early this year, in February, he was honoured with the Laureus Academy’s Exceptional Achievement award at the Laureus Awards in Monaco for his extraordinary performances last year. Two months later, the world’s most decorated marathon runner, dusted the rest of the men’s field at the London Marathon to claim victory for a record fourth time as his time of 2:02:37 became the second-fastest marathon time on record.

While sweating it out in training, Kipchoge is excited about the air of positivity circulating in his home country, Kenya. “Outside of life in the training camp, I can feel the enthusiasm and passion that my fellow Kenyans have for the challenge. From the capital city of Nairobi to Eldoret about 300km away I see INEOS 1:59 Challenge stickers on cars, buses and houses. Everywhere I go people want a piece of 1:59 and I’m sure the whole country will be glued to their TV screens to watch the race in October.

“I feel such a large percentage of the global athletics community is so positive about what I’m trying to achieve and that is a great feeling. My hope is that they can witness history being made and that I can help inspire them,” said the Isuzu brand ambassador, who is sure to drive home an Isuzu Single Cabin if he achieves his goal in Vienna.

SWAG sets up committees for SWAG Cup, SWAG Awards Nominations and others

Rohr picks Musa, Ekong, 22 others for Cameroon duel in Vienna

Manchester United vs Villarreal head to head: Tale of the tape for Europa League Final