Tijani Cole and Susana Cole defeated their French opponents 8-5 to help Nigeria become the first African nation to win a curling game at a world championship. The win may not have been enough to qualify Broomzilla from Group C into the round of 16, considering they had lost all their previous games at Sørmarka Arena, but it has proven to be a reward for hardwork.

Hardwork “All of our hard work has paid off. We did it,” Susana told CBCSport. The couple could not hide their excitement following the remarkable feat. “I am feeling ecstatic, I am excited,” Tijani told the official website of the World Curling Federation. “To all my countrymen at home, we did it. Our motto, as you can see on our brooms, is ‘we won’t be outworked’. It’s something we look at every day and we say as long as we don’t get outworked, we are proud of what we do,” he enthused.

Tijani and Susana first took up curling three years ago and they have been training rigorously over the past year to improve their skills for this big occasion. The couple, who live in Denver, prepared hard for the championship at the Denver Curling Club in Colorado, USA. “What a great dream to share this with your best friend, my wife,” Tijani said. “You go through so many trials and tribulations. It’s been a long journey.”

Results Their journey at the championship began with Tijani living a childhood dream as he waved the Nigerian flag at the opening ceremony. Then came a 2-13 loss to China on day one, followed by a frustrating 20-0 defeat to the Czech Republic on day two. They scored two in the first end against Wales to secure an early lead on day three but eventually lost 4-10. They then suffered a 7-4 defeat to Croatia on day four and lost 0-18 to Italy on day five before securing victory on day six. 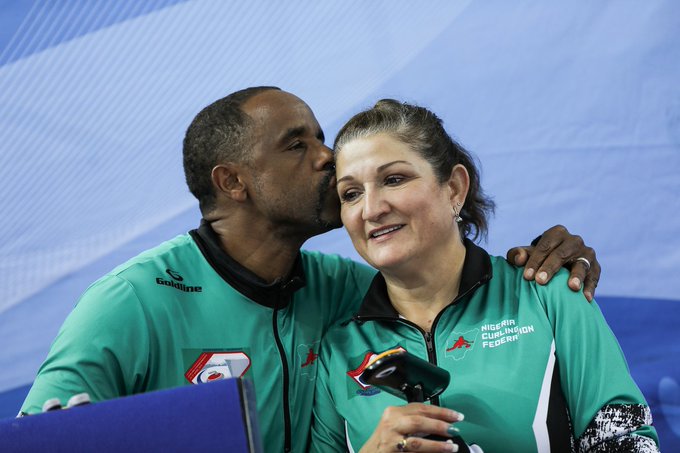 There we have it, a historic first-ever win for an African Member Association at a World Curling Championship. @CurlingNigeria

have beaten France 8-5 in their last game of the #WMDCC2019.#curling

Progress At the start of the championship, their coach Ellery Robichaud spoke to CBCSport about Tijani and Susana’s progress in the sport: “If you saw them last summer compared to know there’s a huge difference,” he said. “I like to work with people who want to learn. They are fun to work with. It’s fantastic. They have a lot to learn but they’re moving at a fast rate.”

Reward After the famous win, the Canadian curler and coach based in Moncton said: “It’s a reward for the headaches of coaching. It can be frustrating sometimes. The rewarding part of today was they got it. They placed the rocks. They put it together.”

The Olympic dream A record 48-teams participated at this year’s championship, and only 16 teams progressed to the play-offs. The play-off teams have automatically qualified for next season’s new 20-team World Mixed Doubles Curling Championship. Nigeria will now have to scramble for one of the remaining four slots in a qualification event. It is very important that Broomzilla do well enough to qualify for the 2020 and 2021 championships because as stated on the official website of the World Curling Federation: “Teams gain qualification points for the Olympic Winter Games in the two World Mixed Doubles Curling Championships prior to the next Games.”